Madrid is a very unique city. At the same time, it’s been the cultural and economic center of Spain since decades. Madrid offers different parties and spectacles that you can imagine to have in the big cities of the world.  At the same time, the city doesn’t lose the traditional parties that usually we can find in small “village”. Madrid is one of the few European cities that continue having the “soul” like in the old times. There are different authentic and traditional parties in Madrid that you can enjoy with your new Spaniard friends. This parties are celebrated in different days of the year and all of them are “street parties” that usually end in party places in Madrid.

Best parties in Madrid which you have to attend | What should I not miss in Madrid?

Madrid center attracts people from all walks of life and has been the venue for some of the best parties in Madrid. While tourists and backpackers typically head to Madrid’s center for a cool pub crawl, you will be surprised at how many wonderful parties happen in the city. As a result, you won’t even need to dress up to go to the parties in Madrid. Here you have the best parties to attend.

Carnival is not a festival with a fixed calendar. The date of the celebration is variable, between February and March, depending on the date on which “Ash Wednesday” is celebrated in the Christian calendar. There are thematic parades in which all its participants are disguised as the theme that has been chosen in that year. Concerts and dances are also typical in the streets of Madrid. Drinking alcohol normally is not allowed but the good point is that the people continue partying until the next day. Once the street carnivals end, the people just starting the night, go to clubs like Kpital or Fucking Monday.

The San Isidro festivities are the most loved by the locals and, together with the Paloma Festivities, the most traditional in the capital of Spain. They are performed at the beginning of spring when the weather starts to get warm. At these parties in Madrid, occurring for 3 days, you will see thousands of people in the streets. The main area where you should go is called “las vistillas garden” where are different Spanish DJ’s playing all type of music. The people that usually attend the party drinks a lot of beer. As a recommendation, charge well your phone because is easy to get lost in the crowd. Definitely, this is one of the best things to do in Madrid at night.

World-famous, this gay pride day is loved by all Madrileños. Considered the largest gay festival in the world, it is a wonderful opportunity to have a great party. In the middle of the day, there are high heels races, a carriage parade and many concerts in different spots of the city. Thousands and thousands of liters of alcoholic beverages are consumed by people throughout the day and night. Ultimately, this is a party that you have to attend. If you like this type of environment and want to continue the party, we have a gay pub crawl for you.

They are centuries-old parties that have managed to reinvent themselves to be, in the XXI century, more fashionable than ever. Verbena is a popular festival that is usually associated with a patron saint and that usually includes traditional dances and stalls of food, drinks and all kinds of sweets and trinkets. In these festivals, people move through the neighborhood of Lavapies and La Latina. People generally enjoy the warm summer in the streets drinking enjoying folk music. There are different traditional food stalls on the sides of the avenues, decorated in the traditional Madrid style. The parties in Madrid this weekend are awesome and are a nice way to discover the culture of the city.

Cultural and typical parties in Madrid | Why is Madrid a tourist attraction?

If your mood and personality is a cultural one, there are also really nice parties in Madrid that you can’t lose. These are traditional parties that attract the attention of every person that walks around the area. Showing the past becoming present by the music, typical dresses and food. Here you have the best cultural parties in the city.

This tradition is celebrated for a week, from Palm Sunday to Easter Sunday. During these days the different brotherhoods take their steps in procession while they walk the streets of the capital with their finery. At the same time, churches and basilicas program sacred music concerts, there is a spectacular tambourine and various events are held in the downtown area of the capital. It is also a time to taste typical dishes such as the famous torrija, soldaditos de Pavía y potaje de garbanzos a la Madrileña.

From Monday, April 30 to Sunday, May 5, the Malasaña Festivities are celebrated on the occasion of May 2. These Festivities are organized by the neighbors in a self-managed way. On Wednesday, May 1, we have the Food of the Suit, in which each participant brings a meal of their choice. The idea is to share it with the rest at the tables that are arranged in the square. On the second of May, there are several concerts that take place in the Plaza Dos de Mayo. The place gets extremely crowded so it is advisable to arrive very early to get a good spot.

The San Lorenzo Festivities move the summer festivities of Madrid to the Lavapiés neighborhood, mainly in the area of Argumosa Street and other surrounding streets that are filled with stalls, music and people. It has a program full of activities such as the contest of traditional characters, the Jazz Festival, the traditional cinema cycle, gastronomy, sports competitions, mus championship, lemonade, dance and festivals. They are celebrations that have high neighborhood participation. Don’t lose the chance to participate in these parties in Madrid in your time here.

It is celebrated on November 9, being one of the main festivals in the capital of Spain together with San Isidro Labrador. The origin of this day takes us back to the Middle Ages, to the 8th century, when before the imminent Muslim invasion, the Christians of the town of Madrid hid the Virgin on the city wall to prevent her image from being desecrated. A traditional mass is held in the Plaza Mayor of the capital, which ends with a procession in the cathedral. Different religious acts are held, including the most important: the floral offering in front of the main façade of the Almudena. Thousands of people assist and you can be there ready to have goosebumps by seeing what’s happening.

In Madrid, the arrival of the new year is celebrated with the traditional 12 grapes. 12 seconds before the old year-end, the people eat for every second a grape. At the same time they making a wish for the new year. All the people get together on Puerta del sol and once the new year’s arrive there a lot of champagne, dances and celebrations for the new wishes and vibes. This party is hard to describe because is better to live it in person. We are sure that there are few things so nice in all of Europe like this one. It is normal that after this celebration people continue the party until the morning in antros or clubs and bars.

The best Parties in Madrid tonight and every night with us!

Other than these parties, there are still other ways that you can enjoy your time in Madrid. There are rooftop bars in Madrid that are ideal to take food and some cocktails. After that, you can start to prepare to go clubbing. We realize just the best pub crawls in all the center. If you are going to be in Madrid and don’t have the opportunity to go to these parties don’t think it too much. Join us!. Your time in the city is a great opportunity to meet internationals and locals. Visit just the best places to party in Madrid making one of the best pub crawls in Europe. 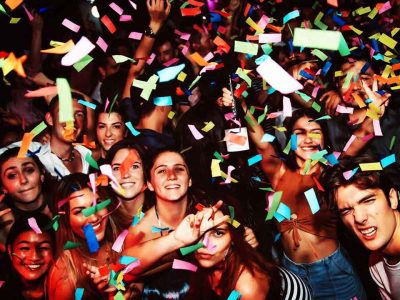 GUIDED PUB CRAWL I’m sorry to say this but if you are reading this it's because you were looking for ...
FIND OUT MORE! 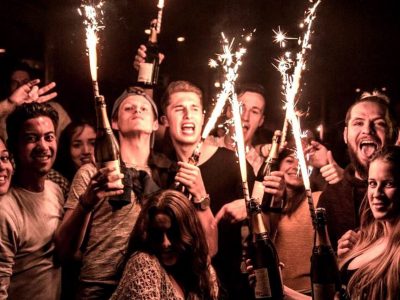 VIP BAR CRAWl MADRID Do you think that it's impossible to know all the trendy pubs and clubs on a ...
FIND OUT MORE! 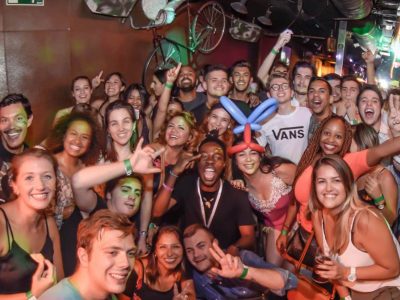 PUB CRAWL MADRID AIRBNB TOURS We know that you go beyond the conventional, as well as your friends. That's why ...
FIND OUT MORE!
Shopping Cart